This article presents a basic Python demonstration of the popular Lucas Kanade tracking algorithm. Lucas Kanade algorithm is an optical flow based feature tracking technique for video. Starting with an assumption that the tracked feature's movement between two sequential frames is very small, this algorithm attempts to calculate the velocity vector \( (u,v) )\ for every tracked feature. The features are usually represented by \( nxn )\ pixel blocks. At the first frame, initial positions of these features are given as algorithm inputs. For every next frame the algorithm updates those positions using a velocity vector calculated at every frame.

The algorithm assumes that the following equation is valid for any pixel in any tracked feature:

The equation above can be also written as:

Once \(\boldsymbol{v})\ for a tracked feature is known, its position can be updated for the next frame.

Here is a sample frame rendered by the program: 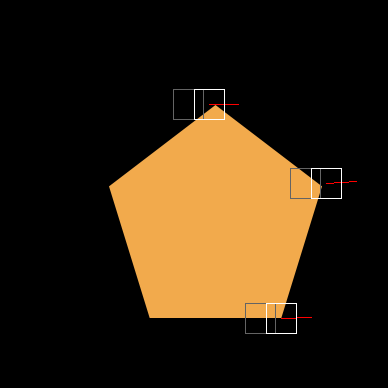 1. All the changes in brightness (intensity) between two consecutive frames can be explained by the movement of object relative to the camera or vice versa.

3. Not all regions are suited for this algorithm. For example, random pixel regions or empty regions are not good candidates.

4. The suitability of a region ( features ) can be verified by computing the eigenvalues of the matrix \( \boldsymbol{S}\boldsymbol{S^T} )\. If the smallest eigenvalue is very small, the matrix is ill-conditioned and cannot be used for the velocity vector computation. The easiest solution is to change the initial feature position for a trackable one.

Source code can be downloaded from GitHub.